Szeth has been named truthless, he was given an Honorblade and was cast out from the Valley of Truth, forced to bear the blade and the sins of all those he served. Szeth is bound unwavering to honor, he is loyal to the extent that he will anything asked by his master including self mutilation. He is forbidden to take his own life or to give up his blade. Szeth while accomplished at assassination, is not a killer, always facing inner turmoil when taking a life, he hears the screams of his victims when he closes his eyes and combined with his self-loathing, he slowly descends to madness.

Szeth is master of the three lashings, Stormlight, and the Shardblade he wields. Szeth is proficient at the martial art of kammar furthermore he shows cunning, intelligence, resourcefulness and determination, When ordered to, Szeth is an unstopable killing machine.

Szeth loathes himself after his many killings and blasphemies. He is forbidden to take his own life, but he would welcome death.

Szeth is bound to his Oathstone. Whoever owns his Oathstone owned Szeth. Szeth is obliged by his honor to do as the owner commanded with the exception of killing himself or giving up his Shardblade.[3]

He was named Truthless at approximately 27 years of age and was traded to the Thaylen merchant Vstim shortly afterwards.[5]

At some later point Szeth came into 仆族智者 possession by as of yet unknown means. When he was 29 years of age, he was given orders to murder King 迦维拉尔 of Alethkar during the Alethi-Parshendi treaty-signing celebrations, in public, and be seen doing it with live witnesses. A fierce battle between Gavilar and Szeth commenced. Fooled into believing Gavilar was a bodyguard in the beginning, Szeth was forced into chasing after the escaping target, instead of fighting a protracted battle. However soon after, he realized the target was simply a decoy, since Gavilar would be much safer in his own Shardplate, fighting with his Shardblade, instead of fleeing for his life. Doubling back, Szeth abandoned chase and returned to kill Gavilar. In the ensuing battle, Gavilar almost succeeds in killing Szeth with a Shardplate enhanced punch, but ultimately fails and falls to his death upon a piece of wooden debris, impaling him in a spot where the Shardplate had been broken. Before dying, Gavilar had two last requests: to tell his brother to "find the most important words a man could say", and to protect a mysterious black orb that shone dark light. Szeth honored both requests, scrawling a message to 达力拿 into the wood with Gavilar's own hand and blood.[1]And Eventually he also hid away the black orb somewhere in 雅克维德.[3] 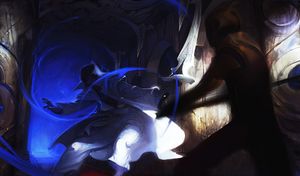 He wore traditional white Parshendi assassin attire on the night he killed Gavilar, which led to him being known as the Assassin in White. Parshendi customs bade assassins to wear white, for if someone were to be assassinated, they were owed a fair warning.[1]

Following Gavilar's death, the Parshendi threw away Szeth's Oathstone as they fled Kholinar. As the Alethi believed that Szeth had fled with the Parshendi they did not attempt to track him down and instead began the Vengeance Pact, waging war on the Parshendi. Meanwhile Szeth was eventually picked up by 阿瓦多. The travelling merchant took him to Jah Keved in fear of possible Alethi retributions against strange foreigners in the wake of their king's death. Over the course of more than 5 years, the Oathstone changed possession many times before landing in the hands of Took, a transient worker. Took was robbed and killed after a night of drinking in Ironsway, a town in the Bavland, and Szeth's Oathstone went to Makkek.[3] With Szeth under his control, Makkek set out to gain wealth, first by killing his fellow robbers, and then establishing a gambling den in 水邦镇.[6]

On one of Makkek's missions, this time to eliminate a rival who had opened his own gambling place, Szeth infiltrated the local lord's mansion where his target Gavashaw resided. There he met a mysterious stranger who knew of Szeth and his role in Gavilar's death, revealing in detail of Szeth's powers, and also of a new master they both now served, revealing his Oathstone taken from Makkek. Gavashaw and Makkek had both been killed. 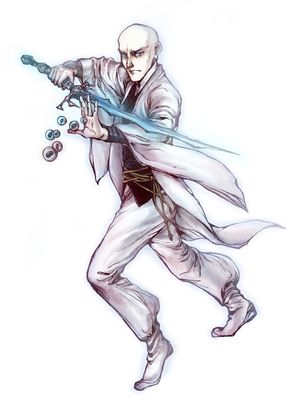 The stranger gave Szeth a list of high ranking targets, all of whom were to be eliminated with the same skill displayed over five years ago in Kholinar. Szeth set out to do his work. His second last goal was King Hanavanar of Jah Keved whom he killed along with his two Shardbearer guards.[7]

King 塔拉梵吉安, the last one on Szeth's hit list, turned out to be his secret employer. Widely known as the dim witted, elderly, yet kind king of 卡哈巴兰斯, Taravangian actually ran a secret hospital hidden in the king's palace. It was built in a large room with wide railings on the sides. Its purpose was to slowly kill the incredibly sick, elderly, or just undesired remnants of society by slowly draining the blood out of them, thereby protracting their death out of public eyesight. Taravangian did this because some of the dying spoke during the last moments of their life, which he thought might provide valuable insight about the coming Desolation. So in order to prepare for it, he began collecting their death throes.[8]

During a Highstorm, Szeth attacked King Elhokar's palace. He entered through a hole he cut in the way, and quickly killed Beld and cut through Hobber's midriff, crippling the use of his legs. He proceeded to fight against Adolin, Kaladin and Dalinar. He quickly gained the upper hand, sending Adolin to the ceiling and cutting through Kaladin's arm. When he was about to kill Dalinar, Dalinar caught the Shardblade between his hands, allowing Kaladin to push both himself and Szeth through the hole in the wall that Szeth had made to enter the palace. The two of them fell to the ground, both surviving. Szeth panicked when he saw Kaladin healing his arm, and when Kaladin told him he was a Windrunner, Szeth fled.

After his confrontation with Kaladin, Szeth retreats to the top of Urithiru where he wonders if he was wrong the entire time, he stares into the distance and trying not to blink as he hears the screams of his victims every time he closes his eyes. Szeth shouts at the sun demanding why must he bear the sins if he is not truthless and decides to go look for answers or someone to kill.

Szeth finds Taravangian and demands to know if the Radiants are returning, he holds himself barely in check, and his self control is almost gone. Taravangian quickly deflects and tells Szeth that an honorblade that allows regrowth and that the man Szeth fought was no Radiant, Szeth is appeased and vows to kill him and retrieve the honorblade. Taravangian forbids him and orders Szeth to kill Dalinar Kholin while staying away from the man.

Szeth is a Surgebinder who has Windrunner powers. He is not bound to an honorspren like the other known Windrunner, 卡拉丁 [9]. Szeth seems to possess a relatively informed knowledge of the Windrunner order of the 光辉骑士团, knowing the name of the order as well as their name for the powers they possessed: the three Lashings.

Szeth possessed an Honorblade that was long and thin, edged on both sides. It was smaller than most others. Being bonded to this blade granted Szeth the abilities of a Windrunner. Hence why Szeth had no bond to a spren. After losing his Honorblade, Szeth is presented with Nightblood.[请求来源]