Lift has long straight dark hair that she wears down to her waist.[1] Her skin is tan and she has the rounded features of the Reshi. Lift always keeps a diamond mark in her pocket, which she considers lucky.

As would be expected from someone Lift's age, she often acts child-like.[1] For instance, although she is thirteen years old, she claims to be ten because she believes that any number that she cannot count to on her fingers is unlucky. Lift is often sarcastic and irreverent, which often annoys her fellow Azish thieves. She also enjoys mocking her spren, Wyndle, calling him a Voidbringer instead of a spren because she knows it annoys him and not due to any sort of dislike she has for him. Lift also has little patience for Wyndle's extremely technical explanation of the Realmatic Theory behind her abilities. Despite her teasing, she truly does like Wyndle and is genuinely worried for him when she thinks that Darkness is following her to try and kill Wyndle.

Lift has an interesting perspective on the morality of her thievery.[1] She does not think it wrong because it does not hurt anyone. Lift is also totally uninterested in stealing typical items such as gold, jewelry, spheres or anything traditionally of value. Instead, she likes to break into places and eat their food. She steals food for the challenge, rather than trying to gain any sort of wealth for herself. She uses the Surge of Abrasion often in her thefts.

For all her flaws, Lift has a good heart.[1] She has seen much death in her life, but it still impacts her greatly when someone she knows dies. For instance, when Gawx is mortally wounded, she cares enough to return and try to save him, despite the fact that she is risking capture and death to do so. Lift cares for other people because she thought that someone has to, which seems to be a temperament that is shared by other Edgedancers. Once, Lift tried to stop caring about others, possibly during her time in Rall Elorim, but she quit because it was worse than being dead. 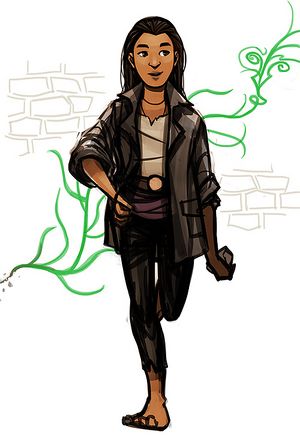 Despite Lift's race, she was not born in the Reshi Isles.[1] The only reason that she knows that she is Reshi is because her mother told her so. She never lived there or knew her people at all. Lift grew up in the city of Rall Elorim, the City of Shadows, in Iri. Lift had a tough childhood there. It appears she grew up on the streets there, learning to move through crowds with ease. It is possible that Lift learned her thieving skills in Rall Elorim. She eventually left Rall Elorim for unknown reasons, possibly due to her difficult life. It also seems likely that this was the time in her life when Lift attempted to stop caring.

Lift also visited the Valley to see the Nightwatcher and ask a boon of her.[1] It is unknown what Lift's request was, or what Lift's curse was, but it appears that her boon was that Nightwatcher altered her to exist partially in the Cognitive realm. Due to this incredible power bestowed upon Lift by their mother, the Ring decided that Wyndle should be sent to bond with her, so he could mold her while she was still young. This granted Lift her Surgebinding abilities.

Lift spent some time in Marabethia, where she was hunted by Darkness, because he believed that her Surgebinding could bring another Desolation to Roshar.[1] She fled Marabethia and went to the capital of Azir, Azimir. There, Lift fell in with a crew of thieves. The crew was made up of Tigzikk, who Lift called Tig, Huqin, his nephew Gawx, Maxin, and two unnamed brothers who were quick with knives. Tigzikk was the only one Lift knew well. An informant told him which night would be good for robbing the Bronze Palace, while the vizerate was busy choosing a new Prime Aqasix, following the death of the last two at the hands of Szeth. Lift could have robbed the palace on her own, but she felt like she owed it to Tigzikk to help him, and she wanted to make sure that he would be safe.

When the crew enters the grounds of Bronze Palace, Lift spots Darkness in the streets near the palace and quickly climbs the wall to escape.[1] She uses Wyndle to gain access to a room which the thieving crew begins ransacking for clothes and shoes. Lift is supposed to keep watch in the room with Gawx, but she leaves in search of food, and he follows. They disagree about where to go, she wants to go to the Prime's quarters where she can find food, but Gawx wants to go to the Vizers' quarters, which he thinks will be mostly empty. They each go their separate ways.

Lift manages to successfully sneak into the Prime's quarters because of the commotion caused when Gawx is caught.[1] However, before she can eat much food, Darkness arrives, along with two associates, bearing forms that give him the authority to arrest and execute her. Lift is briefly captured, and manages to escape, but during the process one of Darkness's men cuts Gawx's throat. Despite the fact that she is safely away, Lift decides to return to try to heal Gawx from his wound.

Lift returns in time to save Gawx's life, performing Regrowth for the first time to heal him.[1] Darkness then captures her and drags her away to kill her. However, the viziers think that Gawx has healed himself, and believe that it was a sign from the Heralds that Gawx is to be their new Prime Aquasix. They think it means that he can survive future attacks from Szeth. Gawx hurriedly pardons Lift for her crimes, and Darkness is forced to release her.

Even without any sort of magical help, Lift is a skilled thief.[1] She can scale walls easily and is a skilled enough pickpocket that she can easily steal as many spheres as she likes without it being any sort of challenge. Her mastery of thievery is possibly what drives her to break into heavily guarded locations and steal something so unconventional as food.

Lift has formed a Nahel bond with Wyndle, which grants her the ability to Surgebind, although Lift herself is not entirely certain whether she believes this.[1] As with all Surgebinders, Lift gains superhuman strength and speed when she holds Stormlight, as well as the ability to heal quickly from non-mortal wounds. When Lift is invested with Stormlight, she refers to it as her "Awesomeness". She is a member of the order of Radiants known as the Edgedancers. This gives her access to two Surges, Friction and Growth. An interesting note about Lift is her unusual ability to metabolize food to stormlight, while this may seem a great blessing, it currently hinders her ability to gather stormlight from other sources like gems.

Abrasion allows her to change the friction of her body against her surroundings.[1] She can reduce the friction, and presumably increase it as well. She refers to this ability as her "Slickness". Lift uses this ability often to make quick getaways. She reduces friction on all parts of her body, except the soles of her feet and palms of her hands and then kneels and propels herself swiftly forward using her palms. This also comes in handy when Lift is escaping guards or someone else attempting to catch her. As Lift's body is essentially frictionless, it is nearly impossible for them to get a grip on her and stop her.

The Surge of Progression allows for two different sorts of abilities.[1] The more basic of these two is simply called Growth. Lift can use Stormlight to increase the rate of growth of plants. When Lift uses Growth, plant life that she illuminates grows at an extremely accelerated rate, and she has some measure of control over the way that they grow. She is less practiced at this ability, but she uses it for things such as making vines grow to force a locked window open. It is unknown if this allows Lift to enhance the Growth rate of animals or not.

The Surge of Progression also allows Lift another power, known as Regrowth.[1] It allows Lift to heal others from serious injuries that would otherwise be fatal. When Lift uses Regrowth, she breathes out clouds of Stormlight which then flow into the injured person's mouth, healing them.

Lift's visit to the Nightwatcher leaves her with a rather unique trait, one that is not among the typical power set of the Edgedancers.[1] She exists partially in the Cognitive realm, which grants her some special abilities. The first is that she can touch spren, something that is supposed to be impossible, as they exist mostly in the Cognitive realm. This ability greatly helps Lift with her thievery, as Wyndle takes the form of a vine. He can make handholds or increase the width of ledges for Lift by growing where she needs to go, but no one else is able to see or touch him.

Lift's other power is even more impressive.[1] Most Surgebinders need to draw Stormlight from an external source in order to manipulate the Surges. Lift, however, can metabolize food directly into Stormlight, instead of sugar.[2] Food that she can metabolize quicker, such as bread can be metabolized into Stormlight faster than something like sausage, but may provide less Stormlight overall because it has fewer calories. She can also convert the energy reserves in her own body into Stormlight. These abilities are unique to Lift.[3] However, this power can be dangerous too, as she often risks malnutrition when she burns through all her excess energy.[1] There is another issue with the fact that Lift can gain Stormlight from food. She does not learn how to drain Stormlight from external sources, so the amount of Stormlight she can use is limited by the amount of food she has eaten.

In Edgedancer, it is hinted that Lift wished to remain the same, not change, or to remain young. The boon and curse are still unknown as of Edgedancer's release.

Lift is a character that Brandon Sanderson has had in his head for quite a while.[4] She is a classic example of what he is hoping to do with a broader series, such as the Stormlight Archive. With the extra space a multi-book series allows, Brandon wants to create a world full of cultures and characters that are less common in fantasy and science fiction. Lift is an outgrowth of this desire. Brandon wants the Knights Radiant to be something different than classical European knights. He doesn't want them to all be young, white, men, swearing oaths of chivalry and valor. Brandon was looking for a character that would be interesting and popular, but no one's first idea when they thought of a knight. Lift, a thirteen year old Hispanic girl on a thieving crew with a weird sense of morality, is the result. Brandon hopes that playing with concepts like these, and stretching our ideas of what a fantasy book and it's characters should look like will allow him to avoid the staleness that is a common complaint in science fiction and fantasy.

Lift's appearance in an interlude in Words of Radiance will be the first of many.[5] Brandon decided to write an interlude featuring her, as a sort of "seed" for her future appearances.[6] She is one of the flashback characters for the second five book arc in the Stormlight Archive,[7] something that Brandon has planned for a long time.[4] As one of the characters in the back five books, Lift will become even more prominent as the series continues.[8] Brandon intends to perhaps even write a few more short stories featuring Lift before he publishes her books.[9]